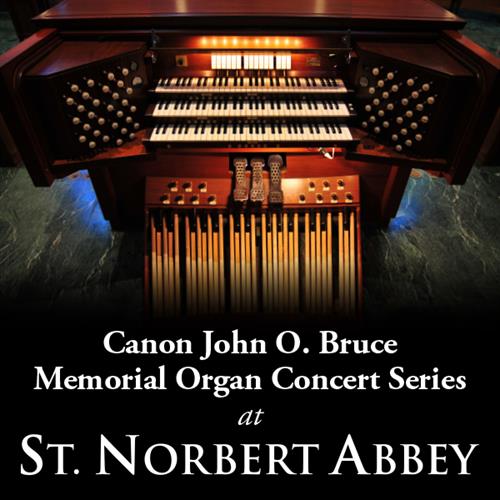 For the first concert of its 2019-2020 season, St. Norbert Abbey’s Canon John O. Bruce Memorial Organ Concert Series presents organist David Briggs. The concert is open to the public and is a free will offering. “Mr. Briggs is one of our finest organists, and also a particularly
good transcriber of orchestral works for his own instrument.”
—The New York Times

David Briggs is an internationally renowned organist whose
performances are acclaimed for their musicality, virtuosity, and
ability to excite and engage audiences of all ages. Consistently
ranked as one of the finest organists of his generation, David’s
extensive repertoire spans five centuries. He has also become one
of the foremost organ transcribers of symphonic works, thereby
giving listeners the opportunity to experience the organ in a new
way. He has transcribed orchestral compositions by Schubert,
Tchaikovsky, Elgar, Bruckner, Ravel, and Bach as well as Mahler’s
Second, Third, Fourth, Fifth, Sixth, and Eighth symphonies.

Described as ‘an intrepid improviser” by Michael Barone, host of
American Public Media’s Pipedreams, David also frequently
performs improvisations to silent films such as Phantom of the
Opera, Hunchback of Notre-Dame, Nosferatu, Jeanne d’Arc,
Metropolis, King of Kings, Dr Jekyll and Mr Hyde, the General, and
a variety of Charlie Chaplin films.